Allure of the Seas

by Camille Pepe Sperrazza  We see it from the sky! As the plane approaches the Ft. Lauderdale airport, one cruise ship sticks out from among the many others at the Port Everglades Pier -- Royal Caribbean's Allure of the Seas -- the largest cruise ship in the world.  For a ship this size, embarkation was a breeze. We were on board by 11:30 am, and walking  the promenade, an area with an array of stores and attractions. "I thought I was in a mall," was how Morty, one of the friends traveling with our group, described it -- lots of wide space, and something to see at every turn.  We would learn that this promenade is a great gathering spot. During the course of the cruise, two parades marched through this area; events were held here; and from the top level, a globe would open to reveal a staircase from which entertainers would be showcased. A fancy car remained parked here for picture-posing, and the Rising Tide Bar - a kind of glass-enclosed elevator in which guests can enjoy cocktails -- begins its journey to other decks from this location.  The Allure of the Seas is noted for its incredible shows and its numerous food venues. Making reservations on line, in advance, is a must, as when you're on a ship this big, things tend to book up fast. I put together a schedule of shows and dinners for our group, months in advance, so we wouldn't miss a thing!  We started with dinner at the Mexican Fiesta, a specialty restaurant with lots of singing, dancing, and dishes served family style. It was great fun. The men received Mexican hats, and the women wore light-up necklaces. In between courses, we were encouraged to enter crazy contests and participate in dance trains around the restaurant. It was one way to get everyone in the party spirit.  Then we moved on to see our first show: "Chicago." It was a good first night.  We had another memorable meal at Giovanni's where the eggplant parmesan was a favorite.  For lunch, I often enjoyed what's called the "healthy" buffet - Solarium, Deck 15 -- where there seemed to be more gourmet options than at the regular buffet. There were also a number of shrimp options - my kind of food. Strawberry flavored water and mango flavored water were nice touches.  The staterooms on this ship are located in neighborhoods. Some of us stayed in the Boardwalk area, a lively place on the same deck as Johnny Rockets, a merry-go-round, hot dog stand, and The Aqua Theater, to name some of the fun. One thing to be aware of when reserving a cabin is that there are ocean view balconies and balconies that overlook the Boardwalk area. We had ocean view ones which I recommend. While it can be fun to overlook the busy Boardwalk area, you will also be privy to the sounds of music and special attractions, which may or may not be exactly what you had in mind.  Another area, Central Park, is lined with shops, restaurants, and benches, including a fun café where the bagels and lox are popular for breakfast. You can get them topped with temptings such as apricot cream cheese, arugula, and fresh tomato. Enjoy them, eating at the tables and chairs in the "park." There are ocean view balconies on this deck as well as balconies that overlook the "park." While this area may be a bit quieter than the Boardwalk, there's still nothing like an ocean view. After all, that's what cruising is all about.  If you're adventurous, zip line across the ship! If you're not, just watch everyone else do it.  The spa is tremendous, and I indulged in a treatment that involved mud, a lime scrub, and tropical rain showers. When I left, my skin was very soft.  The headliner show featured an Elton John impersonator. He was so good, I left feeling like I had seen an Elton John concert. The OceanAria Show at the Aqua Theater is an amazing display of trapeze artists, divers, and incredible athletics, all taking place in or around the water.  Also not to be missed is the ice show. I smiled with delight from start to finish. Who would ever imagine there would one day be an ice show on a Caribbean cruise ship.  Speaking of ice, while in St. Thomas, I visited a new attraction -- Magic Ice. The owner came all the way from Norway to start this unique ice gallery and ice bar in the Caribbean, which had only opened a month prior. We were supplied with warm hooded coats, gloves, and leg warmers, to walk through a large area featuring ice sculptures. A drink at the ice bar and souvenir glass were included. In sunny St. Maartin, we went yacht-racing on sail boats that have actually competed in the America's Cup race. Each person is assigned a job. I was hoping to swab the deck so I would stay out of everyone's way. Instead, I was given the job of "navigator." Somehow, we survived. We were happy to have cousin Ron on our team, as he has Coast Guard experience. It's all in good fun, as we are really all in the safe hands of an experienced captain and crew. Some of the jobs do require some muscle. But then, you may get picked to be the bartender. This involves distributing drinks from the cooler.  For more information or to book a trip, contact "Commodore" Camille today.  This article was accurate when it was written, but everything in life changes. Enjoy the journey!  Copyright: Camille Pepe Sperrazza

The Allure of the Seas 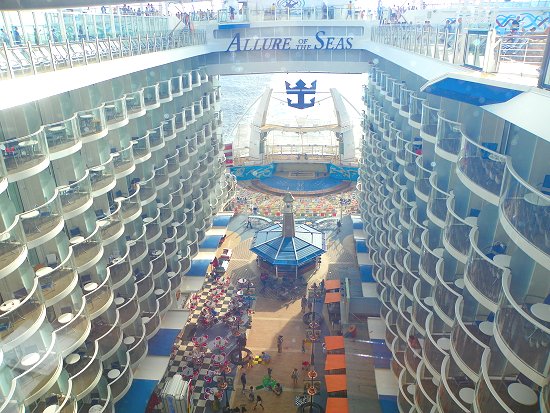