by Camille Pepe Sperrazza
What a privilege to be among the 1,000 Americans to climb the Great Wall of China on March 25, 2016, the year that President Obama and Chinese President Xi Jinping designated as China-US Tourism Year.  In addition to this spectacular experience, I was honored to lead our group of Americans in a procession along the City Wall of Xian, in the same welcoming ceremony that President Bill Clinton and his family received when they visited Xian in 1998. Musicians and dancers in colorful costumes met us at the gate, beckoning the way, while dozens of photographers and members of the press snapped photos of my first steps, as if I were a bride walking down the aisle. A cloth scroll embossed with my name was presented to me, along with a Guosuo, the equivalent of being awarded the key to the city.  The privilege of being the lead U.S. delegate in this extravagant observance will forever be one of the highlights of all my travels. That evening I was further honored by being invited to dine at the head banquet table with the governor and other dignitaries.  Incredibly, there was still more to come. It was the culmination of a dream to see the life-size Terra Cotta Warriors, arguably one of the greatest archeological discoveries of the 20th century. We cruised the Yangtze River; toured The Ghost of Fungi, known as "hell," the place where people are said to go when they die, so Buddha can hand out judgment. We spent three days in the modern city of Shanghai, delighting in its sky scrapers and contemporary structures.  Then, of course, there was The Great Wall of China. More than 13,000 miles, it is also the world's biggest cemetery as many people died while building it, collapsing and being buried without fanfare or markers. But the day we climbed, there was great fanfare - dancing dragons, parades, flags, food, refreshments, and volunteers to help the 1,000 Americans make it to the top. The international press took photos and conducted interviews. A drone flew overhead, videotaping it all.  The sky was clear and blue that day, visible above mountains that rose and dipped across the horizon. The Great Wall spread across it all, doing the same. Climbing was no easy feat as we lifted ourselves up that mountain, over steep and uneven stone steps built thousands of years ago. But as we reached different plateaus, planned activities served as distractions, encouraging us to continue to ascent, and giving us pause to catch our breath. At one platform, citizens eagerly posed with us, excited to snap selfies that captured this historic occasion.  At another level, women played musical instruments, positioned so that the sky and the steps of the Wall in the background looked like the stairway to heaven. It was all humbling and enchanting. At every turn, the scenery changed, and more photos needed to be taken to capture that particular magical moment. My eyes teared, taking it all in. Somehow, I had managed to get to the other side of the earth and was standing on The Great Wall of China.  For more information or to book a trip, contact "Commodore" Camille today.  This article was accurate when it was written, but everything in life changes. Enjoy the journey!  Copyright: Camille Pepe Sperrazza

Camille and Bernadette atop The Great Wall of China 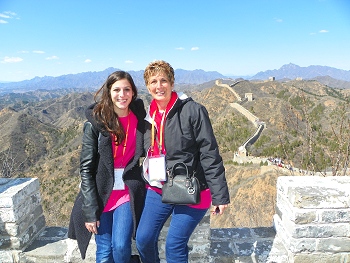