Cuba on the Norwegian Sky

One of the easiest ways to visit Cuba is via the Norwegian Sky which sails from Miami.

Hop the ship, and sail in comfort. The 4-day cruise includes meals, drinks, and entertainment, including cocktails, wine, and beer. Norwegian can take care of securing the necessary visa for you, too.

Enjoy the on-board festivities on the day you board. Arrive in Cuba the next morning.

It is very convenient to pre-plan shore excursions directly with Norwegian, and that is exactly what we did, so that everything is pre-paid in dollars, and exchanging money can be avoided. Below is a taste of our adventure. We would love to help secure your cruise to this exciting destination:

On our first day in Cuba, we are taken to a taxi stand that is filled with classic cars from the 1950’s.

We gravitate towards a 1953 maroon-colored Chevy, and are cruisin’ through the streets of Havana in style!  Our driver, Alex, says this car, which is in pristine condition, has been in his family all these years.  "We have the best mechanics in the world," he says. The interior, covered in plastic, is spotless. The glove department opens with a key, the windows roll down via the crank, and there is no air conditioning. It doesn't matter. It is fun to ride in this novel car with the windows down, a small breeze blowing. We are part of a convoy, somewhere in the middle of a pack of other classic cars, working their way along the streets of Havana.

Most cars are Chevy's, but there is an occasional Buick. Alex tells us the only cars that Cubans can legally own are ones that were built and purchased before 1959.

Our first stop is at the Presidential Palace, the tallest structure in Cuba. It is housing for the President, but we are told he actually lives elsewhere in a secret location.

We visit the Christopher Columbus Cemetery which is described as an "open museum," with many large tombs reflecting Cuba's history.  One is the monument to fire fighters that contains detailed carvings and portraits. The pelican represents sacrifice.

We drive through residential neighborhoods, and then by a lake where the tree trunks are massive. Alex pauses to point out the way the leaves and branches hang from one tree, as it offers an optical illusion of an elephant. He asks for our cell phones so he can photograph it for us, something he has apparently done on many occasions.

We stop at the Hotel National, a former casino hotel that was patronized by movie stars and mobsters in its heyday. The guide notes that this hotel is mentioned 12 times in the movie, The Godfather. There is memorabilia throughout - photographs and painted murals of celebrities adorn the walls. We enjoy a "Ron Collins," a rum-based drink, and sit at the tables where celebrities once drank and smoked the best Cuban cigars. The hotel has lush gardens, fountains, and outdoor seating. The beach serves as the backdrop for a trio of musicians who provide the entertainment.

We return to the ship, grab a bite to eat, and walk around the port area. The Cuban people are welcoming, and we feel very safe. An outdoor market is within walking distance, so we go shopping. Among the finds are hand-carved wooden cars with trunks and hoods that pop open and close, replicas of the very cars in which we had been driven. While we wait, names are engraved in the wood, a nice way to bring home some personalized souvenirs.

In the evening, we are ready for our shore excursion to the famous Tropicana nightclub. More than one person has told us, "You haven't been to Cuba until you've been to the Tropicana." This is the club made famous by Lucy and Desi in the old "I Love Lucy" television shows. We have seats so close to the stage that when dancers twirl, their costumes go over our heads. A few times we have to move our drinks to the far side of the table to prevent them from being knocked over. The show is a lively, colorful-costumed array of incredible dancing, shaking, and music. It's a throwback to yesteryear with some women parading around with crystal lampshades on their heads. A glass of sparkling wine is provided when the show starts, and a bottle of Cuban rum and cans of coke arrive shortly afterwards. In addition to the cost of the shore excursion, it the club charges $5 to take photos with your cell phone, and $15 to take videos. This fee is paid upon entrance.

Our second day in Cuba takes us to the home of "Papa" Ernest Hemingway who lived there for about 22 years, fishing, drinking, and writing classics like The Old Man and the Sea and For Whom the Bell Tolls.

His house is a museum, and while we are not permitted entry, we get to peek inside the large windows which are all wide open, and picture-taking is encouraged.  Hemingway was a world traveler and a hunter, so many animal heads adorn the walls, juxtaposed with treasured artwork, including a Picasso of an animal head. There are books galore, newspapers, and lots of bottles of rum. My prize photo is a close-up of his typewriter.

We visit the fishing village of Cojimar, the setting for the novel, "The Old Man and the Sea". A bust of Hemingway overlooks the ocean, and the bar, La Terraza de Cojimar, carries his photos as it was his favorite drinking spot in the area.

Back in Havana, we are taken to the Hotel Ambos Mundos. Hemingway lived in Room 511 for a while. A wrought black iron elevator takes tourists inside the actual room, which is filled with artifacts.  The typewriter in this room faces an open window, providing insight into his view as he pounded the keys.

Later, on our own, we have daiquiris at El Floridita, a Havana Hemingway haunt where a life-size statue of him sits at the bar. It makes a great photo op to share a toast with this Pulitzer-winning writer who said, “Don’t bother with churches, government buildings, or city squares; if you want to know about a culture, spend a night in its bars.”

There is still some time before the ship sails to stop at a nearby old-fashioned chocolate shop, and to taste some churros that a street vendor prepares from scratch, right before our eyes.

Day 3 of the cruise takes us to Norwegian’s private island, Great Stirrup in the Bahamas, a great way to spend a beach day, before arriving in Miami the next morning. 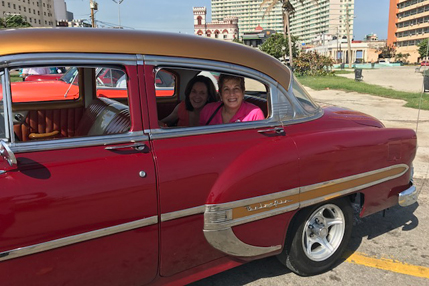 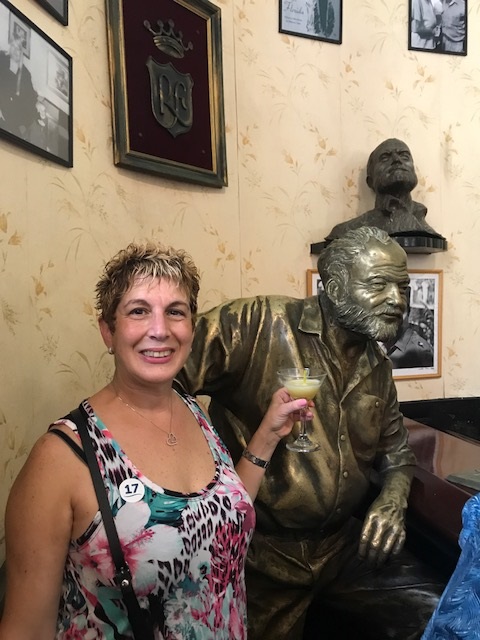