by Camille Pepe Sperrazza  There are few things more exciting than sailing aboard a new cruise ship - and what an honor it was to be invited to the inaugural of the Norwegian Getaway!  It was an opportunity to explore a fabulous new ship, and to mingle with top Norwegian executives, all on board for the celebration.  The Getaway shares many of the same features of its sister ship, the Breakaway, but rather than duplicating the Breakaway's New York theme, the Getaway capitalizes on what makes its home port of Miami unique, offering some Latino flair. One of the bars is called the Sugarcane Mojito, with cocktails such as the Coco Mojito and a few spicy concoctions.  All Norwegian ships have distinguished hulls, and this one is of a colorful mermaid, hair flowing and ruby-red lips. The figure was painted by artist Lebo, whom I met on board.  What is called The Manhattan Room on the Breakaway is called The Tropicana Room on the Getaway. It's still the same wonderful supper club, with live music nightly, one of the dining venues offered at no charge. But don't expect to see the Manhattan skyline décor - instead there's Miami panache.  Another unique feature is The Grammy Experience. This venue contains original clothing from Grammy Award winning artists such as The Jackson Five. Actual Grammy Awards are displayed. You can stroll through the exhibit at any time. In the evening, a Grammy-Award winner performs live. Nestor Torres, jazz flautist, performed when I was there.  As on the Breakaway, Buddy the "Cake Boss," has a shop, and was on board promoting his delicious goods - but it will cost you extra to taste them, as nothing he sells is included in the cruise fare. (Psst...He was spotted playing the casino tables, too). "Iron Chef" Geoffrey Zakarian lends his name to the Ocean Blue restaurant. You'll have to pay to dine there as well.  Of the 27 restaurants on board, about eleven are offered at no additional cover charge, including O'Sheehan's Irish Pub, noted for its sizzling chicken wings. It's always lively at this hot spot, which wraps around the atrium, the place where much of the ship's activities take place. You can enjoy cocktails and bar bites, without missing a thing. The pub is open 24 hours, in case you simply must have a chicken wing at 4 am.  Like the Breakaway, the Getaway has outdoor gourmet dining along the Waterfront, so you can catch those dazzling sunsets at sea. That's what cruising is all about.  Nobody does nightlife like Norwegian. It has, by far, the best shows to "catch" at sea. Don't miss the live production of "Legally Blonde." There's a comedy show; "Howl with the Moon" dueling piano bar; casino; disco; "Burn the Floor" Latin dance show; bar and music venues throughout the ship. No stale, been-there-seen-that productions anywhere, and all these are included in the fare. A dinner and magic show is offered at The Illusionarium, for a fee.  Don't miss the nightly parties at Spice H2O outdoor beach club where you can dance under the stars, against the backdrop of a huge screen that features a laser light show. Although it was too cold for this on the inaugural - my balcony was covered with snow- it was my favorite place to be at night on the Breakaway. Live fireworks are featured on each sailing.  Should it all get too hot to handle, cool things down at the Ice Bar where drinks are served in glasses made of ice, atop a bar made of ice. Sit on the sculptured ice throne. Yes, it's cold in there. You will be provided with gloves and a warm hooded poncho. There is a charge to get inside. Still, it's a lot cheaper than traveling to Stockholm where ice bars are all the rage.  You can walk the plank of the pool; slide through tunnels galore; and climb the rock wall and ropes. There are lots of activities for families, including a Nickelodeon Pajama Jam. Pack your p.j.'s.  Get away from the crowds by splurging on luxurious cabins in the Haven suites, where you'll have access to concierge service, an intimate pool and hot tub, priority boarding, and priceless perks like a private bar and dining where the food is as grand as the cabin.  If you're single, get ready to mingle. There are studios for one - but you are never alone because you'll have access to a private lounge where other solo travelers gather. A white board lists activities, should you wish to participate. No pressure. It's all "free-style" cruising. You do what you want, when you want. That's cruising "like a Norwegian."  For more information or to book a trip, contact "Commodore" Camille today.  This article was accurate when it was written, but everything in life changes. Enjoy the journey!  Copyright: Camille Pepe Sperrazza  with artist, Lebo, aboard the Getaway. 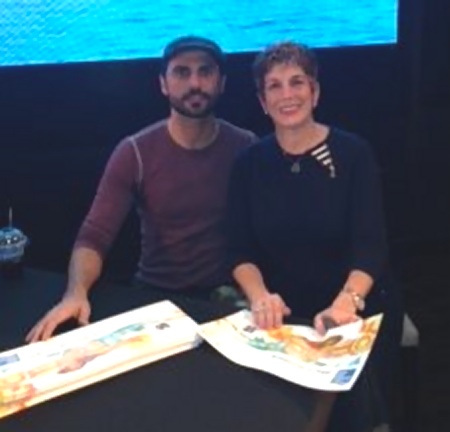