by Camille Pepe Sperrazza  I spent New Year's Eve at the greatest party in the world.  There is no place -- and I mean no place -- more exciting than being in Times Square on New Year's Eve.  This year, I was at an office party, right next door to the Hard Rock Cafe, so close to where the ball drops, I thought I would see my reflection in the crystal. I spent hours hanging out the open office window, being rained upon by confetti and balloons.. It didn't matter that the temperature on the billboard read six degrees at one point. I was warmed by the zeal of hundreds of thousands of people, gathered as far as the eye could see, thrilled to be part of the festivities that, prior to this incredible night, they had only seen on television. That passion is contagious.  It didn't matter that I had met many of the people at the office party for the first time that night, and that a number of them were from different parts of the world. There are no strangers in New York City on New Year's Eve. We're one collective pulse; the heartbeat of this vibrant city. Music has a way of uniting people, too, and we were at the biggest outdoor concert on the planet. The streets carried the sounds of Lionel Richie's live and enthusiastic version of "Dancin' on the Ceiling." Elton John was out there in the cold, making our hearts melt with his performance of John Lennon's "Imagine." Taylor Swift sang, "God Bless America," and the Jonas Brothers made a million people scream just by walking on stage.  Hillary Clinton, Bill Clinton, and Mayor Bloomberg were right there, ringing in the new year with us. Where else but at the Crossroads of the World could we celebrate new beginnings with such a diverse group that included friends, acquaintances, top entertainers, an ex-president, a future secretary of state, and the mayor?  When the giant billboard shouted the countdown, the crowd roared, fanatical about the opportunities and experiences the new year might bring. It's that hope, that possibility of making dreams come true next year, that binds us. There's no other way I'd rather start the new year, and no where else I'd rather be.  For more information, contact "Commodore" Camille today.  This article was accurate when it was written, but everything in life changes. Enjoy the journey!  Copyright: Camille Pepe Sperrazza 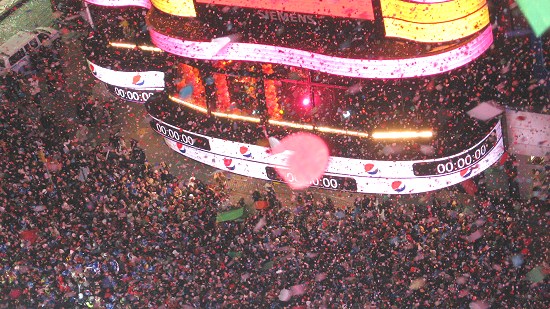