4/24/19 - I am thrilled to be invited to the U. S. inaugural of the Norwegian Joy, departing from Vancouver, and sailing to Los Angeles, providing three sea days to experience this exciting new ship. It also presents the opportunity to visit Vancouver, so my guest and I fly out two days in advance to tour this beautiful city. I arrange for a private car to pick us up at the airport so we can begin immediately. Our time is limited, and I don’t want to miss a thing.

We drive through the area of Richmond, which has the largest Asian population in North America, says our Asian guide. He tells us part of the appeal is because the name “Richmond” has the word “rich,” in it, and when viewed on a map, the area is shaped like a dragon. Many come from China, he says, and have brought fantastic Chinese restaurants to the area. Real estate has soared.

It is a beautiful sunny day in Vancouver, and this is rare, so as we drive, we get to enjoy the majestic views of snow-covered mountains in the distance, and soaring skyscrapers that are juxtaposed in front of them. Streets are abundant with greenery, thanks to the frequent rainfall, and cherry blossom trees are in full bloom, gifts from Japan.

We’re told Vancouver has the ambitious plan to become the greenest city in the world, so there are many bike lanes, and we see some rooftops are covered with grass to better absorb rainwater.

Our first stop is Queen Elizabeth Park, filled with daffodils, tulips, and colorful flowers. Then it is on to Granville Island - Once an actual island, but landfill now connects it to the mainland. A century ago it was all industry, and the old warehouses have been converted to quaint mom-and-pop shops and eateries. The area is home to the public market, and one has to be a local to own and operate here. To assure there are no chain stores, it also has to be the primary place of business. There’s a brewery, and a pet store that offers gluten-free and lactose-free food for animals.

We visit Stanley Park, a green oasis in the midst of the city. It is named after Lord Stanley, a Governor General, and representative of the queen; the same Stanley for whom the Stanley Cup is named. The park is lovely, with fabulous views of lakes, mountains, and skyscrapers. Several totem poles and carved gateways tell the stories of the pioneers who came here. Interestingly, there is a statue, “The Lady in the Wet Suit,” resembling

The Little Mermaid in Copenhagen, posed on a rock at the waterfront.

We also tour the popular area of Gastown, where lampposts resemble old gas lamps, but are actually electric. The area is so-named because newcomer “Gassy Jack” wanted to build a saloon, so he asked locals for help, promising free booze in exchange. Rumor has it the work was completed in a day, and a tall statue of him sits at a paved intersection. The pretty vicinity offers artsy shops and restaurants, all walking distance from our hotel, the Fairmont Waterfront. We check in around 7 pm, eat dinner, and get some sleep. A 14-hour tour of Victoria is planned for tomorrow.

4/25 - Our guide picks us up at 8:30 am to catch the 11 am ferry to Victoria, British Columbia. But thanks to a 2-hour ferry delay, we don’t board until after 1 pm. That ride is an hour and a half, and then, off the ferry in Victoria, it is another 45-minute ride on our tour bus to the famed Butchart Gardens, to see flowers from all over the world. The Gardens were started in the early 1900’s, by Jennie Butchart whose husband, Robert, was a manufacturer of cement. She wanted to transform unsightly barren pits that developed due to the excavation of limestone that was used for cement. Our guide explains that these are not botanical gardens, so flowers and plants aren’t labeled. Instead, gardens are arranged in a manner to enhance their beauty, grouping, for example, pale and dark pink blossoms with light blue flowers. We stroll through these floral surroundings amid totem poles, water fountains, and canopies under which weddings are held. There are Sunken Gardens, Japanese Gardens, and Italian Gardens - the latter includes a copy of the Porcellino (“Little Pig”) that stands in Florence, Italy; and a gelato shop.  As The Gardens close at 6 pm and it has taken forever to get here, we have only an hour and a half to roam, but it is enough - and we get to ride the carousal, too.

Then it’s back on the bus for another 45-minute ride to downtown Victoria, where we have an hour and a half of “free time” - just enough to get a dinner of clam chowder, salad, and chicken wings at a pub called The Local, and to learn that Victoria was a trading post, of which beaver hats were its biggest commodity.

Another bus ride, ferry ride, followed by yet another bus ride means we don’t return to the hotel until 12:30 am, an exhausting day of traveling. But the hotel is so close to the cruise terminal, we can see The Joy has arrived! It is secured to the dock, waiting for us to board tomorrow. All we have to do is cross the street.

Our inaugural sailing is an invitation-only event for people in the industry. We experience the ship first so we can tell our clients all about it.

Among the highlights and “hot spots”:

Sailing beneath the Lions Gate Bridge - It looks as if the ship won’t clear the bridge so be out on deck to scream along with the crowd while musicians build the frenzy.

The Cavern Club - This fantastic venue is a replica of the tavern located in Liverpool where The Beatles and many other famous acts performed. John Lennon’s half-sister, Julia Baird, is aboard to tell us that the space is purposely created to be small - there are only a few tables, so it’s standing-room only, and this is part of the vibe. The actual Cavern was a fruit and warehouse cellar that could only be accessed by climbing down many steps. Trains would travel beneath it, and the entire place would vibrate. There was no air conditioning. Thankfully, the venue here involves no steps and is air conditioned. The Beatles impersonators on this sailing are performers from the Cavern in Liverpool, and they are fantastic, keeping us all twisting and shouting.

Headliner’s Comedy Club - I love that there is a cruise ship with nightly comedy shows; such a refreshing change from the usual song-and-dance tunes. And they are funny. “You are top producers so they bring you aboard the ship. It is going to Alaska - but not you. You just get to float around, going nowhere.”

“Footloose” - Each newer Norwegian ship features a Broadway show. This one offers this robust musical. How exciting that Footloose writer Dean Pitchford and choreographer Lynne Taylor-Corbett were on board to lend insight and tell personal tales about Kevin Bacon and so much more.

The Galaxy - This interactive area offers virtual reality experiences, auto racing, and the opportunity to create artwork that appears on the giant fish tank screen that wraps around a wall. There is an extra charge to access.

Laser Tag and Speedway - Compete with fellow passengers in a game of laser tag. Or, actually drive a car on the two-level racetrack located on the top deck. Charges apply.

Q Texas Smokehouse - This is one of Norwegian’s newer specialty restaurants that features fantastic smoked ribs and more, in a country western setting. Charges apply. At night, a band plays honky tonk.

Americana Diner - The 50’s are back. Sit inside classic cars, and place your order. Burgers, nachos, lobster rolls, and more. Additional charges apply.

Gary Quinn, inspirational speaker - He won’t be on your sailing, but what a fantastic surprise to have him aboard, inspiring us to bring “Joy” to the world. He notes that, “When you travel you become happy. Stress disappears.” 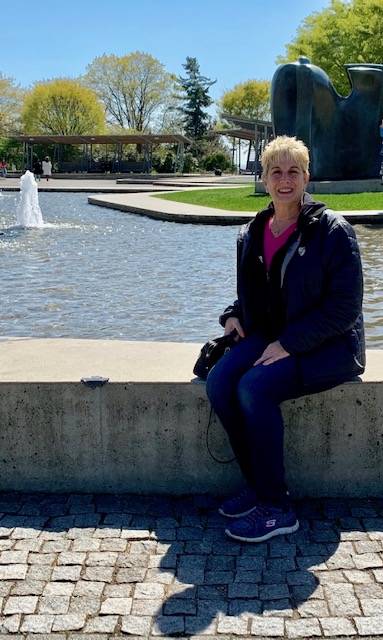