What's the difference between a river cruise and a cruise aboard an ocean liner?

by Camille Pepe Sperrazza  Lots! Make sure you know before you go.  .. Destinations -- On a river cruise, you'll see small port towns that you won't be able to visit when you travel aboard an ocean liner. That's because these small port towns simply can't accommodate huge ships. So if you've been to many of the big port stops, this is an opportunity to explore some unique cities and town which are just beautiful.  Activities -- You probably won't find Broadway-type shows, comedians, or a casino aboard most river cruises. Still, this may be just fine, as you might be exhausted from touring all day long. Sight-seeing is comprehensive. Right after breakfast, you'll probably be on your first tour of the day. Then, it may be back to the ship for lunch, followed by more touring. When you're back again, it's time to get ready for dinner. You may wish to get a good night's sleep before starting all over again the next day. Still there will probably be a musician in the lounge, if you'd like a nightcap before bed.  . Getting Around -- Bring your sneakers. If you're touring Europe, there's always a lot of walking. Some tours are right in the town where you dock. Other times, a tour bus may pick you up. Sometimes, the ship sails to the next port, while you're off touring -- and the tour bus takes you to the ship at the end of the day! River cruising is an ideal way to travel for those who want to explore a number of destinations, without the bother of packing and unpacking.  . Food -- Don't expect as many options as on the big ships. There might be choices such as vegetarian, chicken, meat, or pasta. Food comes from the local towns, so there's lots of fresh fare. On the AMA Waterways cruise I was on, we were offered several choices for dinner, and there was a table of local cheeses as well. For lunch, a buffet-style salad bar was available daily, and items could also be ordered from a menu. Breakfast featured an array of items, buffet-style, including made-to-order eggs. There were also a handful of menu options, such as oatmeal.  . Freebies -- River cruising may look more expensive, but when comparing the costs, remember this: On a river cruise, daily, extensive tours are almost always included in the price you pay upfront. Think of how much you pay for tours after a week-long cruise on an ocean liner, then compare costs. Many river cruises include local beer and wine with dinner every night. Again, think of your bar bill, then compare costs. Bottled water was in our room everyday, no charge, as was our own computer, complete with complimentary Internet access. That's a substantial savings.  . Embarkation -- If you're visiting Europe, you'll probably arrive early in the morning, be picked up by the cruise line at the airport, and brought to the lounge of the ship. But your stateroom may not be ready until the afternoon, so don't plan to take a nap. Make the most of your time touring the city of embarkation. Pack so you won't be burdened by huge carry-on bags. Wear comfortable shoes, and leave large suitcases with the cruise line, so you can explore on your own.  Age range -- Generally speaking, river cruising attracts a middle-aged to older crowd. Take the kiddies somewhere else.  Fun Facts:  -- In Amsterdam, there were so many river cruises in port, we got to walk through other ships to board our vessel. It's called, "right of passage," and it's one way to get to see some of the other ships out there.  -- We had a "French Balcony" stateroom. That's a floor-to-ceiling sliding glass door, with a rail, that opens up, so you can feel the fresh air, and see the world...but there is no outdoor seating area, as the name may imply. Interestingly, because of the passages these river cruises take, as you travel, your balcony stateroom may sometimes provide you with a view of a solid wall.  -- On the other hand, you will also travel close to the pier. So close, people can be standing right in front of your floor-to-ceiling French balcony. Keep this in mind when you open the curtains first thing in the morning.  To book your cruise, contact "Commodore" Camille.  This article was accurate when it was written, but everything in life changes. Enjoy the journey!  Copyright: Camille Pepe Sperrazza 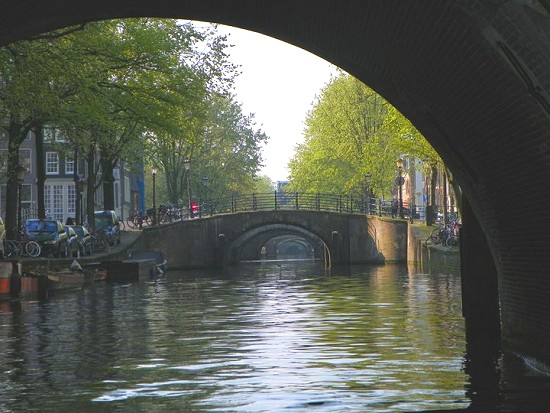